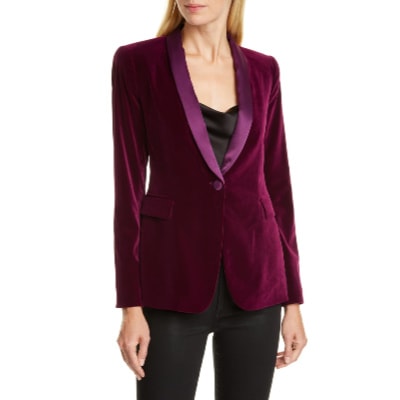 I want to wear this blazer to every holiday party I’m invited to this year. The satin lapels look really luxe against the velvet, and the color is gorgeous. Velvet can be hard to do in an office setting, but I think the weeks between Thanksgiving and Christmas are the time to do it. I’d wear this the way they’ve styled it in these photos — with a black top and slim black pants. If I were feeling particularly adventurous, I might try it out with some wide-leg winter-white pants, but that could veer a little too far into party territory.

The blazer is $485 and available in sizes 0–14. Macey Velvet Shawl Collar Jacket

Nordstrom’s Halogen brand has a more affordable option in regular, petite, and plus sizes for $99.

« Weekend Open Thread
Sales for Workwear! »
Back to Top