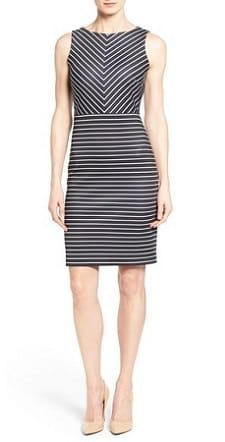 My endorsement of stripes has been middling at best — I’m certainly not all about the Breton shirts the way other bloggers are. Still, I like the contrasting patterns on this sheath dress from Michael Michael Kors, and the fact that it’s marked 40% off and is machine washable doesn’t hurt. It’s available in regular and petite sizes 8-16 at Nordstrom for $83. Michael Michael Kors Stripe Sheath Dress

« Suit of the Week: Reiss
4 Types of Vacation Packages for Busy Women »

« Suit of the Week: Reiss
4 Types of Vacation Packages for Busy Women »
Back to Top