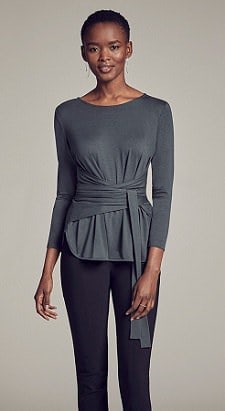 I love this gorgeous, wrap-inspired top from MM. LaFleur. It’s so chic and refined, but simple and versatile at the same time. It looks great with ankle pants as pictured here, and it would also work well with trousers or pencil skirts. I think you could even layer this on top of a tank dress or a sheath dress if you wanted to give it a go. MM. LaFleur notes that the top, which is made in the U.S. from silk jersey, is “bust-friendly,” “middle-friendly,” and “maternity-friendly.” It’s $240 and available in sizes S-XL. (XS is currently sold out, but you can ask to be notified when it’s back in stock.) The Walker Top