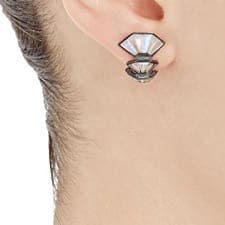 Oooh: I am drooling over most of Nak Armstrong’s jewelry over at Barneys, including these gorgeous mosaic huggie hoops. (He also has some gorgeous little post earrings, and I find myself wishing he made cufflinks too — how great would those be?) I like that these particular hoops could be dressed up or down — wear them to work with an otherwise minimal look; wear them with your hair up and a fanciful dress or top for date night. They’re $1,275. NAK ARMSTRONG Mosaic Huggie Hoops (L-all)

« Going Out Clothes After 25
Frugal Friday’s Workwear Report: Side Ruched V-Neck Top »
Back to Top