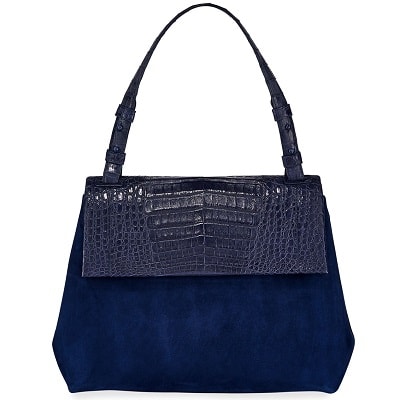 I don’t normally think of myself as an “animal skin” kind of person, but I always drool over Nancy Gonzalez pieces. This particular shoulder bag looks like the perfect combination of matte suede and textured leather, and I love the way the color plays into both. It also seems like a great size — not huge, but not like some of the mini bags that are out right now. It’s definitely a splurge, though: the pictured bag is $2,850 and available at Neiman Marcus and Saks. Sophie Medium Crocodile and Suede Shoulder Bag

Looking for something similar at a much lower price? There are a few of these fairly similar Boden bags left on deep clearance — we featured them a while ago. If you like the general “animal skin” look you should definitely check out the embossed leather bags from this more affordable (but still quality) line.

« Where Is Your Furniture From – And Do You Recommend?
Frugal Friday’s Workwear Report: Button-Front No-Peek Blouse »

« Where Is Your Furniture From – And Do You Recommend?
Frugal Friday’s Workwear Report: Button-Front No-Peek Blouse »
Back to Top