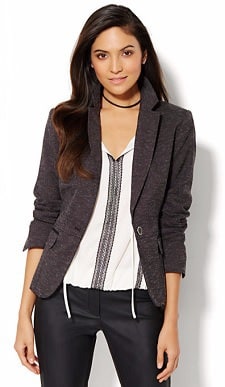 Our daily TPS reports suggest one piece of work-appropriate attire in a range of prices. I love a good knit jacket, and this one from NY & Company looks like that great blend of structure and comfort. It’s $74.95, but if you buy one you get a second 50% off. New York & Company 7th Avenue Design Studio Jacket Here’s a plus-sized option. Seen a great piece you’d like to recommend? Please e-mail [email protected]

Psst: looks like the Nordstrom Fall Clearance Sale has started! I’ll try to do a roundup later today.

« Suit of the Week: Alexander McQueen
What to Wear to Work When It’s Unseasonably Warm »

« Suit of the Week: Alexander McQueen
What to Wear to Work When It’s Unseasonably Warm »
Back to Top