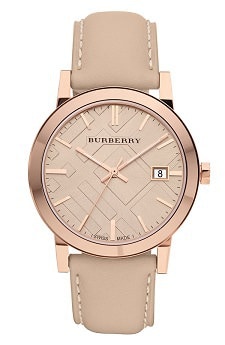 Wow. I’ve started going through the Nordstrom clearance sale, and I can’t tell you how excited I am to see so many beigey/rosey pink watches — a perfect “nude” watch, if you’re pale. Let me back up a bit — one of my favorite fashion movies is Audrey Hepburn’s How to Steal a Million, and after watching it the first time I was absolutely obsessed with finding a light pink nude watch like the one she wore. I looked high; I looked low — I could not find a similar watch. So the fact that there are so many (and part of the Nordstrom sale!) is very exciting. This Burberry one is on a great sale — it was $495, but is now marked to $330. Burberry Check Stamped Round Dial Watch, 38mm Here’s a more affordable option from Kate Spade (the sale is chock full of the brand!).