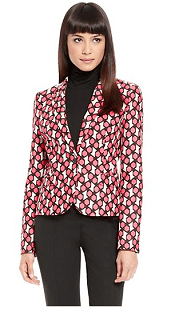 I don’t know what it is about this blazer, but I love it. The odd geometric pattern is cool, and I think the salmon pink color could actually be worn year round. The blazer is made of “fine stretch silk.” Gorgeous. The Afiraly style is apparently a classic Hugo blazer style; Stylebop has a number of solid colors marked from $405-$470. This geometric silk one is $750 at HugoBoss.com. One-Button Geometric Print ‘Afiraly 1’ Blazer by HUGO

« Weekend Open Thread
Variety Versus Routine »
Back to Top