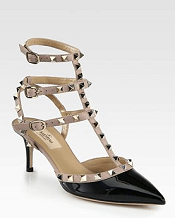 I’m usually able to resist the allure of designer shoes… but my goodness these are gorgeous. Love that rocker vibe mixed with what looks like a pretty flattering design and a walkable 2.5″ heel. The one review on Saks is ebullient — the woman is so pleased with the blush version that she says she’s off to buy other colors. Impressive! But — for $895 I think I’d have to be happy with just one pair. Valentino Patent Leather Rockstud Slingback Pumps

2016 Update: These heels are now in our Workwear Hall of Fame — they’ve been around for years now, win amazing reviews, and keep coming back in new styles and colors.