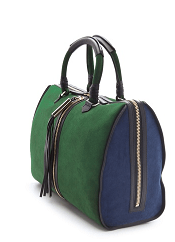 Hello, gorgeous. Love this colorblocked handbag — the pink satin interior, the exposed zipper, the piped seams — it looks ladylike but a bit daring as well. And, ho ho, ShopBop.com‘s Friends and Family sale just started, so you can take 20% off your entire purchase with code WEAREFAMILY. Nice. Was $375, but the price comes to $300 with the code. ONE by Alcantara Lindy Bag