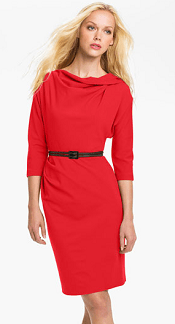 Commenter TCFKAG wrote in to recommend this Suzi Chin dress, noting “People are always looking for sleeved dresses, the price is relatively reasonable and I like the colors available.” Nice! I do like this piece (and the 54 mostly positive reviews). I’m not sure why the model looks so forlorn — the twisted neckline, the three-quarter sleeves, the ladylike length… it’s a great dress! Do note that with the dolman sleeves, it will be hard to throw a blazer on top of it, but I think this dress looks professional enough that you don’t need one. It’s $118, in regular and petites, at Nordstrom. Suzi Chin for Maggy Boutique Belted Dolman Sleeve Sheath Dress Seen a great piece you’d like to recommend? Please e-mail [email protected] (L-2)

« Coffee Break – Lindy Bag
Previously, on Corporette… »
Back to Top