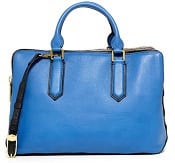 Nordstrom Rack is having some pretty great sales right now (clearance is up top 90% off!) — and for today’s Coffee Break I’m liking this colorful satchel from Oryany. I like the textured leather, the fun interior lining, the numerous wall pockets (and two media pockets). At 10″Hx14″Wx6″D it’s big enough for most letter-sized papers, too, which I like. It was $475, but is now marked to $229. (It’s also available in red.) Oryany Kristina Satchel

« Can You Reply to Faxes with Emails? A Young Lawyer Wonders…
Wednesday’s TPS Report: Piped-Trim Printed Silk Blouse »
Back to Top