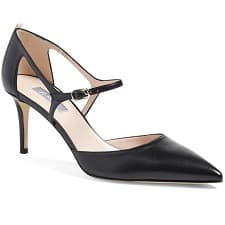 This shoe has been around for a long time, and I don’t think we’ve ever featured it in a Coffee Break. It was one of Sarah Jessica Parker’s original styles, I believe, and I like the classic 3″ heel, the sleek look, the cutouts, and the grosgrain ribbon detail at the back. It’s just a really good shoe, particularly if you’re not great in heels or you want something to wear with tights. It only has 10 reviews at Nordstrom, but they’re very positive, and it’s still available in lucky sizes 6, 8.5, 9.5, 10, and 10.5. SJP by Sarah Jessica Parker ‘Phoebe’ Mary Jane Pump

Here’s a more affordable option in a somewhat similar style, available in three widths in sizes 5-12.