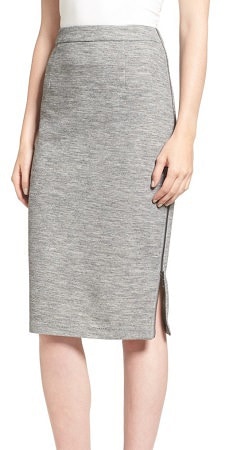 I go back and forth on whether I like the midi style, if only because I feel like it looks the best when it’s worn with the tallest heels — but I think this skirt looks nice for general workwear. I like that it comes in a very cool black-and-white pattern that almost looks like lace, and the little zip at the side doesn’t look like it’s too much. This basic gray that we’re featuring kind of seems like a sophisticated take on the athleisure trend, and it’s hand washable. The skirt comes in regular sizes 0-16 and petite sizes 00-16, and it’s $59 at Nordstrom. Side Zip Pencil Skirt

« Suit of the Week: Classiques Entier
The Best Workwear with Secret Shaping Powers »

« Suit of the Week: Classiques Entier
The Best Workwear with Secret Shaping Powers »
Back to Top