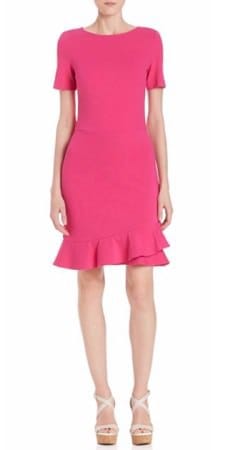 Saks is having a pretty great sale on DvF right now, with several basics in the mix — this pink dress doesn’t really count as a “basic” by anyone’s standards (and it’s available in midnight blue, although full price), but for the right woman and the right office I think it would be a great dress. I always like pink with grays, which mute the color a bit. The dress was $398, but is now marked to $283, with lots of sizes left — other DvF items in the sale include this great black and white top and this simple black A-line dress. Pictured: Diane von Furstenberg Serafina Flounced-Hem Shift Dress

Psst: it turns out the DvF sale is part of the bigger designer sale going on — and they have so many great plus-size designer pieces in the mix that I’ve thrown a bunch onto our plus-size recommendations page — sign up for the Corporette Plus newsletter to get notified when there’s new stuff added to it. (This blouse is probably my favorite among the plus-size sale items.)