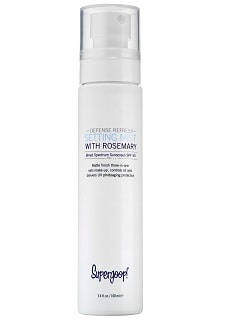 At a recent conference I spoke to a Supergoop! representative about this new product, which promises to fix a number of problems for working women. It’s a refresher with sunscreen that is also a setting spray for your makeup; Vogue included it in its roundup of several similar products last spring. Here’s the rep’s pitch: For working women, even if you sit all day in front of the computer, UV rays can still reach you through glass windows — and so after you eat your lunch and refresh your makeup, you should also spritz this mist to re-up your sunscreen protection. I always find scent a HUGE component of any kind of spray product, and I’m happy to report the rosemary/mint smell is lovely. Light, refreshing — the perfect sort of thing to recenter yourself for a productive afternoon. The spray is $28 for 3.4 oz. (or $12 for 1 oz.) at Sephora. Supergoop! Defense Refresh Setting Mist SPF 50