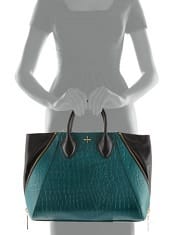 Ooh la la — I love this teal and black tote bag from Pour la Victoire. The deep colors and zipper/croc details are all right up my alley. This is also available in a butter yellow (limited stock), which is less up my alley, but may be up yours. The bag was $395 but is now marked to $206 at Last Call. Pour la Victoire Yves Crocodile Embossed Leather Tote Bag