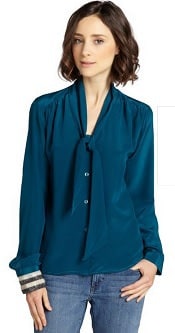 Our daily TPS reports suggest one piece of work-appropriate attire in a range of prices. Silk blouses are classic items for a working wardrobe, and I’m liking these affordable tie neck ones from Wyatt. The ties actually look good in a bow (as pictured); I’ve often tied them like a men’s tie as well. Lots of colors and sizes left — the blouse was $160, but is $49.50. Wyatt Tie Neck Blouse Psst: Here’s a plus-size alternative. Seen a great piece you’d like to recommend? Please e-mail [email protected]