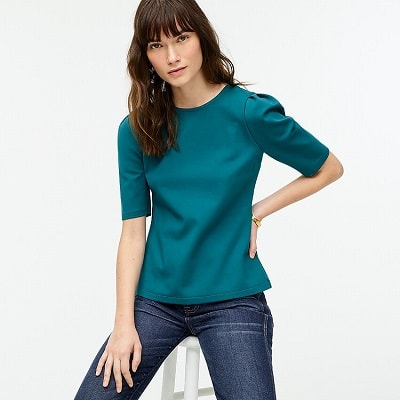 This top looks like a great winter basic to add to your wardrobe. It’s a good length for tucking into skirts or pants, but not so long that you couldn’t wear it untucked with a pair of jeans. I also like elbow sleeves because they fit nicely under blazers or cardigans but still provide some coverage if you’re not wearing a topper. I would wear this “spicy jade” top with a charcoal suit or untucked with some slim navy ankle pants and a bold necklace.

The top is $69.50 — but 50% off today with code THURSDAY — and available in sizes XXS–XXL. It also comes in pink and black. Puff-Sleeve Ponte Top

« Suit of the Week: Ann Taylor
Serious Question: Can You Wear Leggings to Work? »

« Suit of the Week: Ann Taylor
Serious Question: Can You Wear Leggings to Work? »
Back to Top