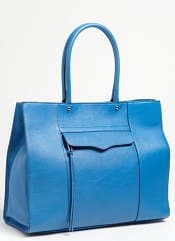 How on earth have I completely forgotten about the existence of this highly rated tote? I love the structure, the fun lining, and all of the great colors it’s offered in. I love the Cerulean, of course, but it does come in both white and black (and about a zillion other colors). It’s $295 at Nordstrom. Rebecca Minkoff  ‘M.A.B.’ Leather Tote

2017 Update: This bag is now in our Workwear Hall of Fame.  It’s been loved for years, continues to come out in new colors and sizes, and has stayed under $300.  Look for it at Bloomingdale’s and Amazon.

« Makeup For Biking to Work
Wednesday’s TPS Report: Willow Jacket »
Back to Top