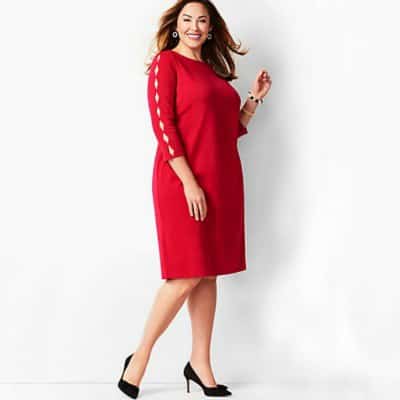 This ponte sheath dress from Talbots comes in regular, petite, and women’s sizes up to 24W. While these kinds of cutouts can be very “know your office” (and know your own body), what I like about this dress compared to others with cutouts is that it’s not intended to be bodycon; it’s more of a shift silhouette than a sheath. Particularly around the holidays, it’s also a nice, festive color, and the sleeves are interesting without being too crazy or inappropriate for work. I think this could easily go from day to night with just a few extra touches of a blingy necklace or fancier heels, and it’s just a very polished, easy dress. The price ranges from $139–$159, but today at Talbots you can get 30% off your entire purchase. Refined Scallop-Edge Ponte Sheath

(If you are interested in plus-size workwear, please sign up for CorporettePlus, our newsletter! Signing up helps us gauge interest in the project, and we promise not to blast your email more than once a week at most. Right now it’s more like once a month.)