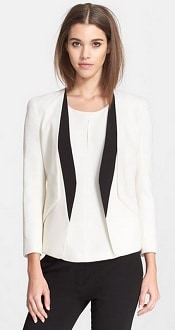 I love the black and white details and the streamlined shape to this gorgeous wool crepe blazer.  (I also love the silk shell with the keyhole, pictured beneath it.)  It’s $2,195 at Nordstrom. Happy Monday! Narciso Rodriguez Contrast Lapel Wool Crepe Blazer

Here are a few lower-priced alternatives (one, two, three) and a plus-size option (and also a longline plus version, colors reversed).

« Weekend Open Thread
Should You Friend Your Boss On Facebook? »

« Weekend Open Thread
Should You Friend Your Boss On Facebook? »
Back to Top