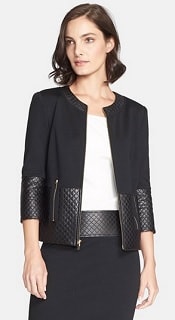 Our daily TPS reports suggest one piece of work-appropriate attire in a range of prices. Moto jackets are everywhere right now, but man — if there ever were a Jackie O version of a moto jacket, this would be it. I like the quilted leather details and the pockets, and while it has a matching skirt, I don’t think you need it. It’s $1695 at Nordstrom. St. John Collection Quilted Leather Trim Milano Knit Jacket Here are a lower priced option and a plus-sized alternative. Seen a great piece you’d like to recommend? Please e-mail [email protected] (L-4)

« Tech Troubles
Five Ways to Improve Your Focus »
Back to Top