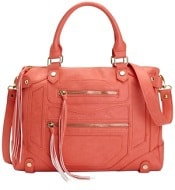 It isn’t surprising that I like this bag: it’s clearly inspired by the Balenciaga bags that I’ve been drooling over for many moons. I normally don’t like things that are so clearly “inspired by,” but for $65-$88, it’s hard to say that it isn’t a great way to at least “try” the style. I like the fun colors it comes in (Zappos has a ton for $88; Macy’s also has a bunch but on sale for $65). Note that it is a pretty big satchel — 14″ wide at the bottom, 11″ tall, and 4″ deep. Steve Madden Btalia Satchel