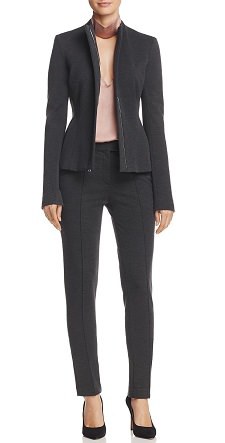 This really lovely suit is from Theory. I like the sedate gray, as well as the contemporary fit, the sort of collarless jacket (the description says it’s a “cropped mock neck”), and the concealed hook-and-eye closures on the front of the jacket. I also like how the pants aren’t super tight but also not super wide — and they’re actually full-length, huzzah! The jacket (Sculpted Knit Twill Jacket) is $475 at Bloomingdale’s, and the skirt (Pintucked Knit Twill Pants) is $285.

Here’s a more affordable option (though in a lighter gray) that comes in several size ranges, including plus sizes (pants / jacket).