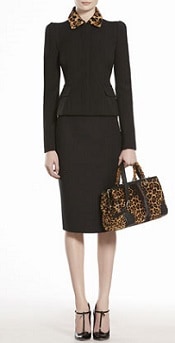 For busy working women, the suit is often the easiest outfit to throw on in the morning. In general, this feature is not about interview suits for women, which should be as classic and basic as you get — instead, this feature is about the slightly different suit that is fashionable, yet professional. There’s something so femme fatale about this suit, and yet I kind of love it in a non-costume sense as well. The fact that the dyed calf hair collar is detachable is probably a plus — with that bit removed it’s just an amazing crepe wool jacket with flattering dart details. The slit on the skirt (on the back) is, um, a bit high for my taste, but so it goes. The jacket (Gucci Wool Jacket with Jaguar Print Collar) is $2300, and the skirt (Gucci Bonded Cotton-Blend Pencil Skirt) is $595. (L-5)