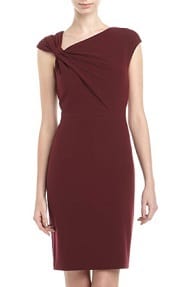 I think I’ve featured this dress before, but this lovely oxblood color is new to me, and I think this is a better sale than what I’ve seen in the past.  The dress was $158, then marked to $115, but with the extra 30% off sale now comes down to $80.50 — sizes 2-16 still left.  I might try it with black accessories (tights, cardigan or blazer, a distinctive black necklace) in the fall, and perhaps a chambray blazer (or something else light blue) as it approaches spring.  (This black dress from Taylor also looks amazing as a desk to dinner dress.) Ivy & Blu Asymmetric Neck Sheath Dress

« Suit of the Week: Gucci
How to Hire an Assistant »

« Suit of the Week: Gucci
How to Hire an Assistant »
Back to Top