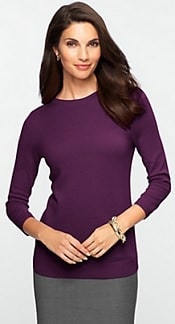 Readers have extolled the virtues of Talbots’ Audrey sweaters — they’re made from soft cashmere, hold up fantastically, are flattering, rarely have any pilling, etc., etc. Nice. They have a ton of solid colors, as well as a few limited sizes in a variety of prints. (OH, and: It comes in misses, petites, woman, and woman petites sizes.) It was $149, but is now available for $78 at Talbots. Talbots Cashmere Audrey Sweater

« Suit of the Week: Antonio Melani
How to Wear Black and Navy Together »

« Suit of the Week: Antonio Melani
How to Wear Black and Navy Together »
Back to Top