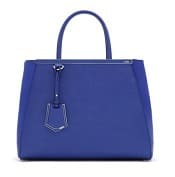 Wow: I love this bag. For some reason I’ve never felt this way about a Fendi — of course I know the designer, but none of their bags have ever been on my radar before. Gorgeous, gorgeous. This bag comes in five colors (!) and several different sizes; this bigger version is my favorite — classy as a tote or a briefcase. It’s $2,350. Fendi ‘2Jours Elite’ Leather Shopper

« How to Wear Black and Navy Together
Frugal Friday’s TPS Report: Blue Leopard Wrap Dress »
Back to Top