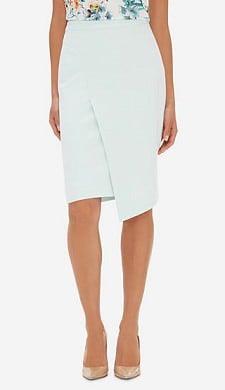 This is a bit of an untraditional pencil skirt, but I don’t think it’s so wacky that it won’t be received well at work. (I wish it were in a darker color, but it’s only available in mint!) I always like mint with navy, black, and charcoal — if you want to have a bit of fun, try it with a purple pump or a purple top so dark it’s almost navy. The skirt is $80 full price, in regular, petite, and tall sizes 00-18, but marked down to $31 today. The Limited High Waist Asymmetrical Pencil Skirt

Two plus-size options are here and here, both on sale.

« Suit of the Week: Ellen Tracy
Job Hopping: Yea or Nay? »
Back to Top