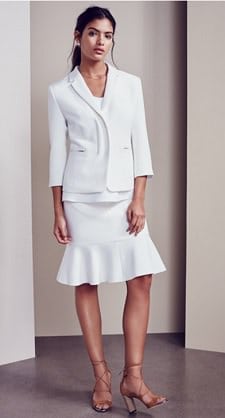 For busy working women, the suit is often the easiest outfit to throw on in the morning. In general, this feature is not about interview suits for women, which should be as classic and basic as you get — instead, this feature is about the slightly different suit that is fashionable, yet professional. I’m not a huge fan of white suits for summer, at least personally — you may as well draw a target on me for spilling my morning coffee. (But weirdly, I really like light gray suits and bottoms for summer.) If you are less of a klutz than I am, this white suit from Ellen Tracy comes in both petite and regular sizes and looks great. The flounce skirt, in particular, is so popular it’s almost sold out in regular sizes at Nordstrom — but Lord & Taylor has it in spades (and on sale for $53). The jacket (Ellen Tracy Hidden Zip Blazer) is $139, and the skirt (Ellen Tracy Flounce Hem Pencil Skirt) is $89. Ellen Tracy White Suit Here’s a plus size option (although not everyone will be a fan of the buttons and other details). (L-5)