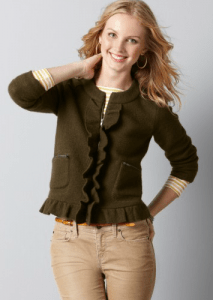 Reader L wrote in (for the first time! thank you L!) to sing the praises of this lovely jacket: “This is a great looking jacket from Ann Taylor Loft. It comes in black, grey and olive. I just got the black and it’s a well-fitting versatile jacket for the price. My clothing budget got slashed when I had a baby, so I LOVE clothes that do double-duty. This jacket transitions easily from the boardroom to the playground. It goes well with pencil skirts/trousers and silk blouses for office meetings but also looks great with jeans and scoop-neck t-shirts on weekends. The combination of ruffles with the zippers gives it a nice modern look, but the boiled wool keeps it structured and put-together looking. I’m an attorney at a hospital and wouldn’t hesitate to wear it to any business meeting. (the olive would also be a nice choice with brown skirts/slacks).” I like it! Its original price was $98, but it’s currently marked to $59.99 — and may be even lower depending on what sale LOFT is running on the site (e.g., 40% off with no code). Ruffled Boiled Wool 3/4 Sleeve Jacket Seen a great piece you’d like to recommend? Please e-mail [email protected] (L-2)

« Suit of the Week: BOSS Black
How Your Career Affects Your Happiness (or: Are There Any Happy Lawyers?) »

« Suit of the Week: BOSS Black
How Your Career Affects Your Happiness (or: Are There Any Happy Lawyers?) »
Back to Top