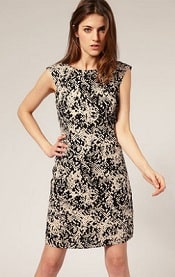 This dress strikes me as a fun, trendy take on the shift dress. Love the boat neckline, the pleat details on the collar, and the abstract print. I’d wear it with a white cardigan or blazer in the summer and spring, and a black one in the other seasons. The print is pretty busy so I’d keep the accessories simple: pearls or a simple gold chain. It was $71.72 at Asos, but is now marked to $57.38 (limited sizes only). Warehouse Abstract Tribal Shift Dress

« Suit of the Week: Armani Collezioni
Sponsored Post: A Curated Pantyhose Collection, from Hoseanna »
Back to Top