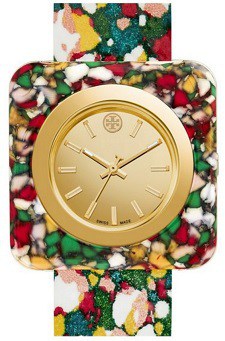 I know readers were just discussing someone’s first good watch purchase, and this probably won’t fill that “basic watch you wear everywhere” kind of need. But it sure is a pretty and fun watch, isn’t it? I first noticed the more minimal style of the ivory/gold version, but this green/gold one is gorgeous. It’s $395 at Nordstrom. Tory Burch ‘Izzie’ Square Leather Strap Watch