Our daily TPS reports suggest one piece of work-appropriate attire in a range of prices. Today’s guest post is from Capitol Hill Style. 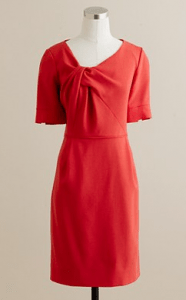 I often shop at British retailers like Karen Millen and LK Bennett for perfectly tailored dresses; our friends in the UK just have a better grasp on affordable professional attire than we do. But that might be changing.

This dress from J.Crew ($188) has a shape that is ladylike without being matronly. It also has a chic knotted-detail and a sophisticated neckline. I’d wear this vibrant red dress with simple, gold jewelry and flesh-toned pumps.

Looking for something more neutral? The dress also comes in charcoal, black and taupe. Choose the black and add a leopard print belt to incorporate one of Fall’s hottest trends. Or balance the charcoal with a jewel-toned pump for a little color. Index dress in wool crepe