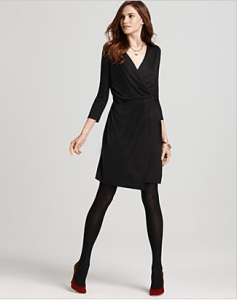 I really like this simple black ruched dress from BOSS Black — the faux wrap, blousy look to the ruching, and the slightly uneven hem all look just a bit more interesting than your boring wrap dress. Also: how do we feel about red heels with black tights? I’m intrigued. In any event, the dress is $295 at Bloomingdale’s. BOSS Black Side Ruched Dress