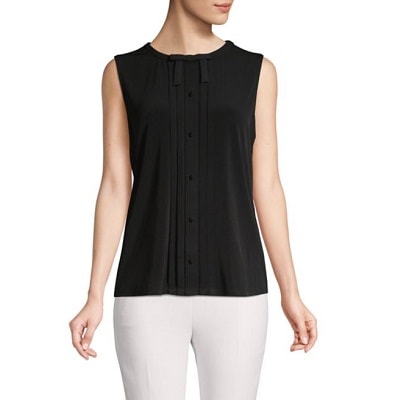 I have a few items from the Karl Lagerfeld Paris brand and have been pleasantly surprised at the quality so far. This tuxedo-pleat blouse looks like a fun basic to add my rotation of tops. I think the tiny bow at the top is cute, but not too juvenile. The care instructions say “dry clean,” but for a top that’s less than $50, I’m not really inclined to pay $9 every time it needs to be cleaned. I’d probably take my chances and wash it in Woolite on the gentle cycle. Tuxedo-Pleat Blouse

The blouse is $49 full price and available in sizes S–XL. It also comes in white. Right now, you can get 20% off with code FALL, which brings the price down to $39.20.