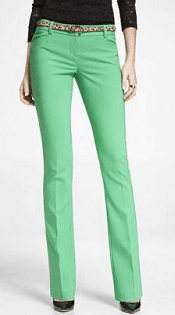 These pants come in 27 different colors.  27! Admittedly, eight of those are beige/brown (is “nude for you” pants the new thing? Does it bother anyone that you can more easily match your skin tone with a pair of pants than you can with most bras or shoes?) Anyway: if you’re looking for a fun way to try a new color with your working wardrobe, you might want to give these pants from Express a try. While they may not seem super versatile, I can think of at least three different outfits off the top of my head, just involving basics (although I think they’d also look fabulous with other colors):  1) Worn with a white button-front and a contrasting color statement necklace. 2) Worn with a gray cardigan, perhaps with a gray belt on top of it. 3) Worn with a black tee and a black blazer. Right now they are full price at $79.90, but if you buy one pair you get the second pair 50% off. ULTIMATE DOUBLE WEAVE WIDE WELT COLUMNIST PANT

« Suit of the Week: BOSS Black
Is Ombre Hair Professional? »

« Suit of the Week: BOSS Black
Is Ombre Hair Professional? »
Back to Top