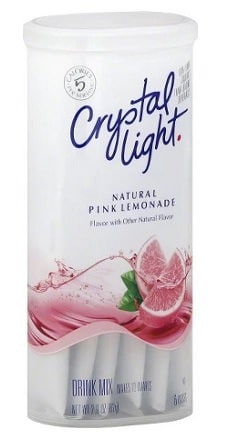 Long ago, a reader turned me on to what she called “unicorn juice:” seltzer with a tiny bit of pink lemonade sprinkled in (or, at least, added to taste — I find it too overwhelming a flavor if it’s more of a sprinkle). It fizzes! It’s pink! It smells pretty! You can buy pouches like this at your local Target. An important side question: what are your favorite seltzer brands and flavors? (LaCroix? Spindrift? Perrier? SodaStream?) Those of you who enjoy mixing things in — anything fancier than old standbys like a splash of cranberry juice?  Crystal Light Natural Pink Lemonade Drink Mix