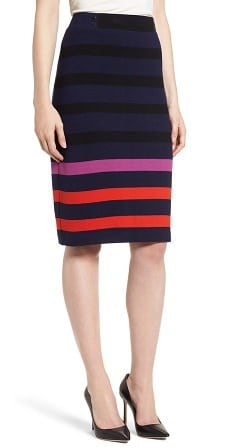 This skirt from Boss has a matching top (which is on sale), but I think it’s better by itself. I love that it combines navy and black with other colors — I think it’s really fun. You can go classic with white or black or navy on top, but you could also wear a green top, or red, or purple, or another complementary color, which would be lovely. It has a hidden side zip, and (bonus!) it’s machine washable. It only has one review so far, but it’s very positive (and make sure to take a look at its size suggestion). The skirt is available in sizes XS–XL and is $215 at Nordstrom. Ebienne Stripe Pencil Skirt

Psst: A few other things that are nice and in this price range: this silk blouse, this ruffled peplum blazer, this tweed blazer, and this kind of awesome white knit shell.

« Coffee Break: Unicorn Juice
The Best Lingerie to Buy at Nordstrom »
Back to Top