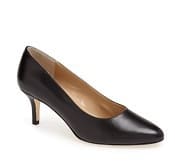 This comfort heel from Nordstrom is highly rated, and I think it looks like a great basic. Zappos has a few more colors, as well. The shoe is $124 and is available in medium, narrow, and wide sizes (and note that 6pm has four other color choices from $61 to $75, as well). VANELi ‘Laureen’ Leather Pump

Psst: On the hunt for other comfortable heels? Check out our Guide to Comfortable Heels — or, share some of your favorites with us, below.

« How to Wear a Vest at the Office
Wednesday’s TPS Report: Interwoven Striped Tweed Jacket »

« How to Wear a Vest at the Office
Wednesday’s TPS Report: Interwoven Striped Tweed Jacket »
Back to Top