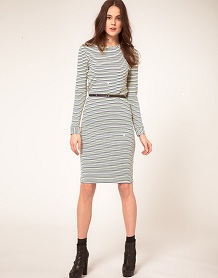 I’m really digging the simplicity of this wool blend dress from Whistles, available at ASOS. I like the stripes, and the casual, non-va-va-voom nature of the dress, mixed with fun details such as the directional change at the neckline and the cuffs. For the office I’d wear this with an opera-length necklace, doubled, a more structured, wider belt than what’s shown here. With warm weather I’d go for nude-for-me pumps, but in colder weather (for a more casual office) I might try black tights with brown knee-high boots. It’s $136.35 at ASOS. Whistles Darryl Midi Dress In Stripe

(Do note — for some reason with the smaller picture it looks like there’s a psychedelic aspect to the stripes — they’re just stripes.  Honest.)