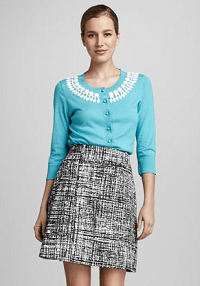 I love the optical crosshatch print on this Kate Spade New York skirt, newly marked down at Neiman Marcus. It looks fresh and modern, particularly as styled here with the bright turquoise cardigan. I wish it were longer, but I’m guessing that if you’re not model-height you’ll be fine. It was $278, but is now marked to $139. Kate Spade New York Gilda Broadhurst Print Skirt

« Coffee Break – Give It a Swirl Triple Row Necklace
Suit of the Week: BASLER »

« Coffee Break – Give It a Swirl Triple Row Necklace
Suit of the Week: BASLER »
Back to Top