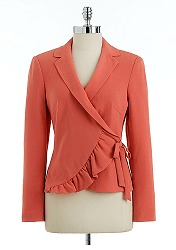 Alas, I cannot wear coral — but for those of you who can, I love this fun little blazer from Sharagano. I’d keep it neutral and try it with navy — perhaps with a pop of royal blue or white somewhere. It’s on sale at Lord & Taylor: was $129, now marked to $104; try code EXTRA to take an extra 20% off. SHARAGANO Ruffled Wrap Blazer Seen a great piece you’d like to recommend? Please e-mail [email protected] (L-2)

« Coffee Break – Cashmere and Silk Waffle Scarf
Guest Post: The Fees That Eat Away At Your 401K »

« Coffee Break – Cashmere and Silk Waffle Scarf
Guest Post: The Fees That Eat Away At Your 401K »
Back to Top