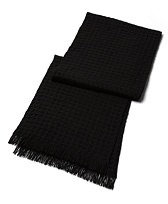 I’ve been eyeing these lovely waffled scarves on sale at Brooks Brothers. They’re available in five colors (black, pictured, as well as navy, beige, forest green, and ivory), and made of cashmere and silk. At 12″ wide it’s a little on the skinny side to use as a wrap, but depending on the weight of the scarf I would still probably try it on colder summer nights and in chilly offices. The scarf is marked down — was $188, now $94 at Brooks Brothers. Cashmere and Silk Waffle Scarf

« How to Use Friends of Friends In Your Job Hunt
Wednesday’s TPS Report: Ruffled Wrap Blazer »

« How to Use Friends of Friends In Your Job Hunt
Wednesday’s TPS Report: Ruffled Wrap Blazer »
Back to Top