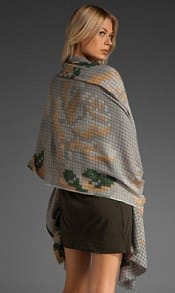 Maybe I spent too much of my childhood playing games like King’s Quest (and Space Quest and Police Quest…), but I love the pixelated-on-purpose look to this floral scarf. It strikes me as witty, but also artsy (for those who don’t remember the 1980s graphics) and, given the muted colors, a good basic. It’s marked down during Revolve’s sale (which has a lot of tights and belts on sale, as well, at least as far as accessories go) — was $169, now $110. Yarnz “Pixel Floral” Cashmere Scarf in Gray