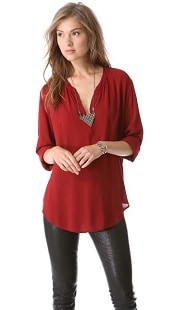 Something on your mind? Chat about it here. Why is it that, just as bootcuts are coming back into style, I am drawn to tunic after tunic, which look best with leggings? I blame all the leather leggings — although I’ve never owned a pair I’ve always liked the look. ANYWAY: This cute voile tunic comes in both red and white, and seems great for a casual weekend outing. It was $95, but is now marked to $66.50. Happy Friday! Velvet Rosie Luxe Challis Tunic (L-2)