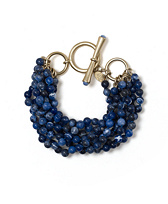 Brooks Brothers is having a sick clearance sale, with lots of items marked up to 70% off. I always like Brooks Brothers jewelry for a classy vibe to “going out,” and that includes this soladite torsade bracelet (also available in onyx and rose quartz). I think it’s way too much for the workday (too big, too noisy, too cumbersome to type in) but for a night out… well, that’s another story. It was $128, now marked to $51.20 at the sale. Soladite Torsade Beaded Bracelet