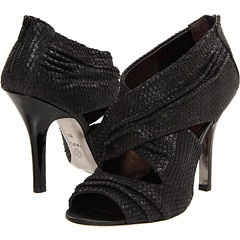 The extremely strappy sandal look has been around for a long time, I think, but it still looks fresh and hot, at least to me. The trick? Finding a pair of heels that’s comfortable to wear with your party dress. I like this pair of 4″ heels from Isola (the same company behind the ubercomfortable Sofft and Born shoes). I like the “quiet” sparkle, the way the straps dip in the front (to help elongate your leg) and the general look. They were $185 at Zappos, but are currently marked to $148. Isola – Balta (Black Sheep Sonner) – Footwear