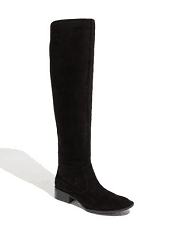 Something on your mind? Chat about it here. In a “pigs are flying past my window” moment, I am seriously considering buying over-the-knee boots. I keep seeing women wearing them with jeans and leggings, and — so long as the heel is flat or nearly flat — they always look amazingly chic and stylish, and not at all like pirates. The Nordstrom shoe clearance sale has a number of good options, all marked down. For example, these suede boots from uber-comfortable brand Børn come in three colors, and are marked 45% off — the boots were $259.95, but are now marked down to $142.96. Børn Crown ‘Cady’ Over the Knee Boot (L-4) Psst: Check out more great deals at the Corporette Bargains page! Update: I forgot to mention: Happy Presidents’ Day Weekend to everyone! If I see any good sales, you know I’ll round them up, so stay tuned…